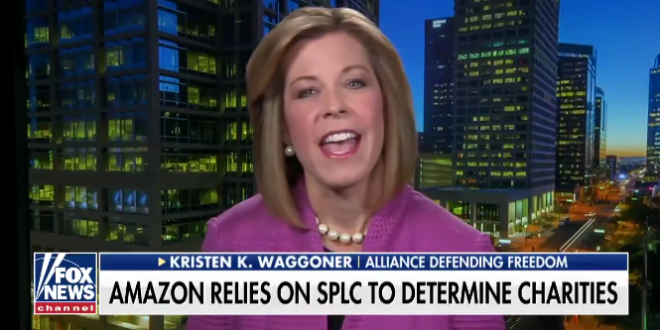 Over the past couple of weeks, we’ve received many calls, emails, and Facebook messages with a major concern: Our Ministry Friends were no longer able to give to Alliance Defending Freedom (ADF) through the AmazonSmile program. In case you’re not familiar with it, AmazonSmile is a website that allows a customer to choose a nonprofit group to receive a percentage of any Amazon purchase.

Apparently, Amazon no longer sees ADF as a suitable nonprofit for its program. But why? We contacted Amazon to find out what happened, and lo and behold, Amazon informed us that we were removed because the Southern Poverty Law Center (SPLC) determines who is qualified. Yes, that SPLC. The one that exploits the terms “hate” and “hate group” against any organization it disagrees with.

Here’s the thing: SPLC did good work many years ago, but it has since devolved into a propaganda machine dedicated to crushing dissent. It does this by labeling anything they disagree with as “hate” – even if those beliefs are widely held and constitutionally protected (as ours – and those of our clients and supporters – most certainly are).

This morning the ADF trotted out their spokes-bigot Kristen Waggoner where she, of course, got a friendly ear on state television. Watch the clip if you can bear it.

Funny how the same people who think that they shouldn’t have to sell cakes to same sex couples seem to want to force a private business to give them money directly. Last I checked, Amazon will still sell stuff to ADF. https://t.co/Zqc93n06EG

Previous Trump Throws Rudy Giuliani Under The Bus [VIDEO]
Next Mitt Romney: My Favorite Meat Is The Hot Dog