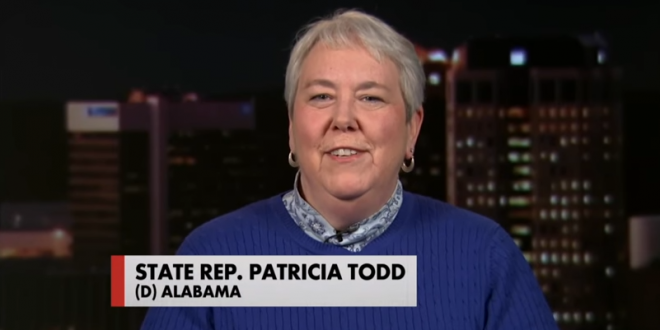 State Rep. Patricia Todd has had her employment offer from a Florida LGBTQ nonprofit rescinded for strongly suggesting that Gov. Kay Ivey is gay and deserves to be outed, the organization announced Thursday. Todd, Alabama’s first openly gay state lawmaker, was set to become executive director of the One Orlando Alliance — a group formed in wake of the Pulse nightclub shooting in 2016 — on June 1.

“After careful deliberation, the board of directors of One Orlando Alliance unanimously decided to retract the offer of employment made to Patricia Todd to serve as executive director of the organization,” the chairwoman of the group’s board, Jennifer Foster, said in a statement. “The board affirms that Ms. Todd’s recent comments are not aligned with the values of One Orlando Alliance. We strongly believe that coming out is a personal choice and we do not support involuntarily outing.”

My latest report on this, including videos of Ivey’s denial because she’s an anti-gay “born again Christian,” is here. (Tipped by JMG reader Scott)

Previous One Million Moms Claims Victory For Cancellation Of Show That Finished Its First Season In 114th Place
Next NO COLLISION! Giuliani Doors Manhattan Pedicab