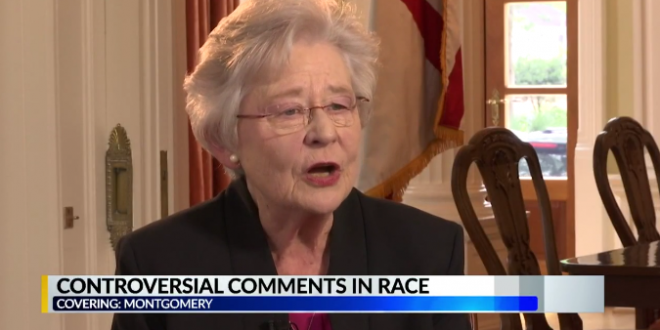 Tuesday, District 54 Rep. Patricia Todd tweeted that she had “heard for years” that Ivey was gay. In a sit down interview with CBS 42, Ivey called the speculation untrue. “it’s disgusting because they’re not telling the truth “I don’t have a clue [where this came from] but i do know that it’s a bold faced lie, and it’s disgusting.” Ivey said.

Ivey doubled down on her assertion that these claims were lies, saying, “The issue here is not about your personal life but telling the truth. I’m a candidate for Governor, I’m a born again Christian, I believe that marriage is made of God between a man and a woman, and I live my life according to those values,” Gov. Ivey added.

In the first clip below, Ivey says, “I certainly don’t agree with their agenda or their lifestyle, but they are citizens and they have certain rights. I understand that.” In the second clip, a local LGBT activist says that while he doesn’t support Ivey, she is being bullied by Rep. Todd.

Here’s how it all apparently started:

A federal grant to a Huntsville organization addressing bullying and domestic violence among LGBTQ individuals became an issue in the Republican race for governor Tuesday. In a statement and news conferences around the state, Republican gubernatorial candidate Scott Dawson accused incumbent Gov. Kay Ivey and the Alabama Department of Economic and Community Affairs (ADECA) of using taxpayer dollars for “the promotion and normalization of gay and transgender lifestyles among Alabama children.”

The money in question was a federal grant to the Huntsville-based Free2Be, aimed at combating bullying and domestic violence among LGBT individuals. Ivey’s office said Tuesday that under federal rules, funds received under the federal Victims of Crime Act (VOCA) must go to groups serving underserved populations, including the LGBTQ community. Ivey’s office Tuesday distanced the governor from Free2Be, saying its views and the grant itself “do not represent Governor Ivey’s personal views.”

Todd was evidently angry over Ivey’s response to criticism about the grant. In the final clip below, Dawson rants about the grant going to a “fringe organization” but disavows having foreknowledge of the “lesbian” rumors about Ivey.