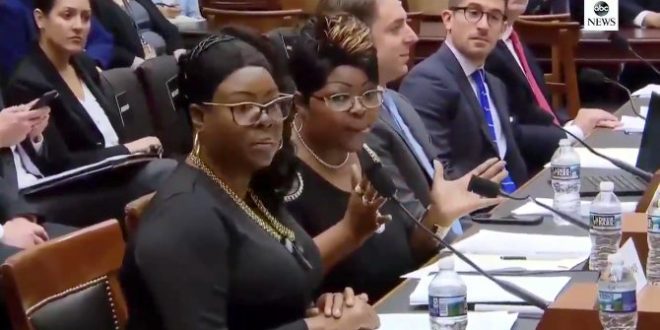 Viral Trump-supporting sisters Diamond and Silk on Thursday lied under oath during their testimony before the House Judiciary Committee, claiming several times that they’d “never been paid by the Trump campaign.”

Records from the Federal Election Commission however, suggest otherwise. According to a November 2016 receipt, the Trump campaign paid them $ 1,274.94 for “field consulting.”

“We are familiar with that particular lie, we can see that you do look at fake news,” Silk said, saying the funds were a reimbursement for airline tickets. “We’ve never been paid by the Trump campaign,” Diamond repeated.

Vocal Trump supporters and social media personalities and sisters Diamond and Silk — whose real names are Lynnette Hardaway and Rochelle Richardson — testified under oath before lawmakers on the House Judiciary Committee Thursday, in a hearing about the alleged filtering practices of social media platforms that quickly descended into impassioned and inconsistent statements.

“Facebook censored our free speech!” Diamond declared loudly at one point. Throughout most of the hearing, Republicans prompted Diamond and Silk to explain how they believe Facebook censored and victimized them, while Democrats pointed out inconsistencies in their testimony and wondered why they were even holding the hearing in the first place.

“This is a stupid and ridiculous hearing,” Rep. Ted Lieu, D-Calif., said, noting that the First Amendment is about protecting free speech against government intervention, not ensuring individual free speech from businesses. “Whey are we having a hearing about regulating content?” Lieu said. “It’s unconstitutional to begin with.”

Where where you when conservative vloggers Diamond and Silk were invited to Capitol Hill to complain that people just aren’t watching their videos on Facebook anymore, and then appeared to perjure themselves multiple times? I know where I was: Sitting at my desk, marveling at the world we live in.

Nevertheless, here we are, with Donald Trump’s favorite YouTube stars appearing before the members of the House Judiciary Committee on Thursday to offer delicious self-owns. The whole thing was just so pointless and so overwhelmingly, blindingly stupid, that it just might be the most perfect encapsulation of politics in 2018 to date.

The videos are just INSANE.