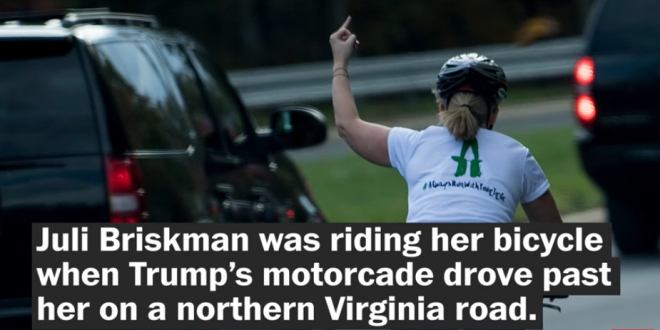 Juli Briskman, the woman who was caught flipping off the presidential motorcade in a photograph that went viral last year, has sued her former employer for firing her, claiming it was a violation of her right to free speech.

In a 10 page complaint filed in the Fairfax County Circuit Court, Briskman claims her former employer, government contractor Akima LLC, violated her First Amendment rights when they ousted her. But she isn’t looking for a big pay out. Briskman has requested damages totaling just $2.692.30 – the amount of her unpaid severance.

Briskman’s now famous October 2017 ride through Sterling, Virginia was done on her own time, she contends and she “extended her middle finger as an expression of disapproval of the president,” the complaint states.

Briskman’s employer reportedly told her they feared retaliation from Trump and the loss of their government contracts. They also claim that her posting of the image to her personal Facebook account constituted “obscene content.” Her complaint further alleges that the company’s director of operations called her a “fucking libtard asshole” in a post on his own Facebook page.