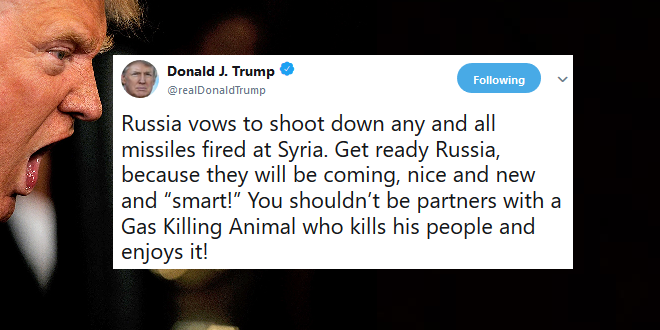 Russia has warned that any U.S. missiles fired at Syria over a suspected chemical weapons attack on a rebel enclave would be shot down and the launch sites targeted, raising the possibility of a U.S.-Russian confrontation. Issuing the warning on Tuesday evening, the Russian ambassador to Lebanon also said such a clash should be avoided and Moscow was ready for negotiations.

But his remarks could raise fears of direct conflict for the first time between major powers backing opposing sides in Syria’s protracted civil war. Moscow and Washington sparred at the United Nations on Tuesday over the use of chemical weapons in Syria as Washington and its allies considered whether to strike at Syrian government forces over the alleged poison gas assault.

Russia vows to shoot down any and all missiles fired at Syria. Get ready Russia, because they will be coming, nice and new and “smart!” You shouldn’t be partners with a Gas Killing Animal who kills his people and enjoys it!

So much Fake News about what is going on in the White House. Very calm and calculated with a big focus on open and fair trade with China, the coming North Korea meeting and, of course, the vicious gas attack in Syria. Feels great to have Bolton & Larry K on board. I (we) are

….doing things that nobody thought possible, despite the never ending and corrupt Russia Investigation, which takes tremendous time and focus. No Collusion or Obstruction (other than I fight back), so now they do the Unthinkable, and RAID a lawyers office for information! BAD!