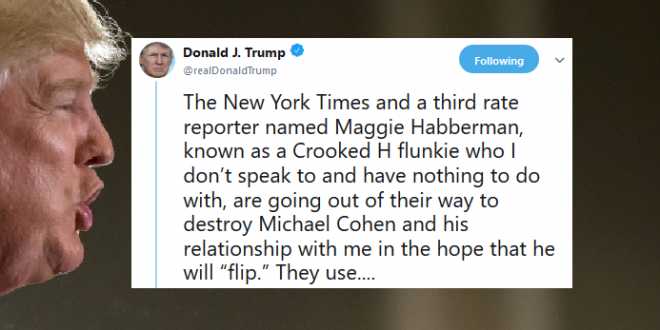 Trump Tweetstorm: Michael Cohen Will Never Flip On Me (And If He Does He’s Lying To Protect Himself)

President Trump on Saturday attacked The New York Times for its reporting on his personal attorney, Michael Cohen, and expressed confidence Cohen will remain loyal to him while under federal investigation. Trump, who has spoken with Haberman on the record for multiple stories in the past, appeared to be referencing a New York Times report on Friday that the president’s legal team is bracing for Cohen to cooperate with prosecutors.

The New York Times and a third rate reporter named Maggie Habberman, known as a Crooked H flunkie who I don’t speak to and have nothing to do with, are going out of their way to destroy Michael Cohen and his relationship with me in the hope that he will “flip.” They use….

….non-existent “sources” and a drunk/drugged up loser who hates Michael, a fine person with a wonderful family. Michael is a businessman for his own account/lawyer who I have always liked & respected. Most people will flip if the Government lets them out of trouble, even if….

….it means lying or making up stories. Sorry, I don’t see Michael doing that despite the horrible Witch Hunt and the dishonest media!

Trump’s old lawyer said roughly the same prebuttal to @ErinBurnett: If Cohen does “flip,” whatever he says is a lie. https://t.co/anTPF5HwJ7

Previous Trump: Mueller’s Probe Is Based On An “Illegal Act”
Next Search For New Amazon HQ Hinges On LGBT Rights