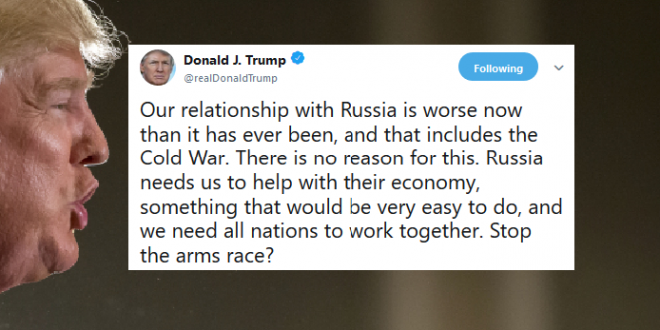 Trump: Things Are Worse Than During The Cold War

President Trump said Wednesday that America’s relationship with Russia is “worse now than it has ever been,” after Russia stymied efforts to investigate an alleged chemical attack in Syria. The president in a tweet implored Russian President Vladimir Putin to “stop the arms race.” Trump’s remark comes just hours after Russian officials blocked a resolution at the U.N. Security Council to condemn chemical weapons attacks and establish a panel to investigate a supposed chemical attack over the weekend in a Syrian rebel stronghold.

Our relationship with Russia is worse now than it has ever been, and that includes the Cold War. There is no reason for this. Russia needs us to help with their economy, something that would be very easy to do, and we need all nations to work together. Stop the arms race?

The worst thing @realDonaldTrump could do is allow himself to be manipulated by the Cohen raid into an attack on Syria. Then they’ll never stop.

AGAIN, TO OUR VERY FOOLISH LEADER, DO NOT ATTACK SYRIA – IF YOU DO MANY VERY BAD THINGS WILL HAPPEN & FROM THAT FIGHT THE U.S. GETS NOTHING!

CNN’s @barbarastarrcnn on President Trump’s warning for Russia to "get ready" for a missile strike on Syria: “It’s hard to see how this is anything but the President of the United States declaring war on Twitter.” https://t.co/5wdlIEYAl1 pic.twitter.com/Gx4QwoabZn