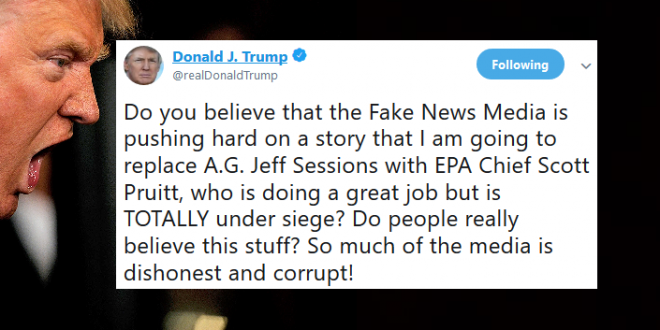 President Donald Trump on Friday voiced fresh support for his embattled Environmental Protection Agency chief, Scott Pruitt, saying he is doing a “great job,” while blasting reports that he’s considering replacing Attorney General Jeff Sessions with Pruitt. According to a CNN report, Trump floated replacing Sessions atop the EPA with Pruitt, even as the agency chief battles deepening ethics scandals over his lavish travel habits, security costs and coziness with lobbyists.

Do you believe that the Fake News Media is pushing hard on a story that I am going to replace A.G. Jeff Sessions with EPA Chief Scott Pruitt, who is doing a great job but is TOTALLY under siege? Do people really believe this stuff? So much of the media is dishonest and corrupt!

Federal Subsidies should be given to REAL news like @FoxNews and Sinclair Broadcasting! CNN should face libel and slander fines

Signs around Capitol Hill poking fun at Scott Pruitt this morning, with little pieces of paper you can tear off that have the EPA Office of Public Affairs office telephone number. As if they have not gotten enough calls this week. pic.twitter.com/FqPgpvFmGW