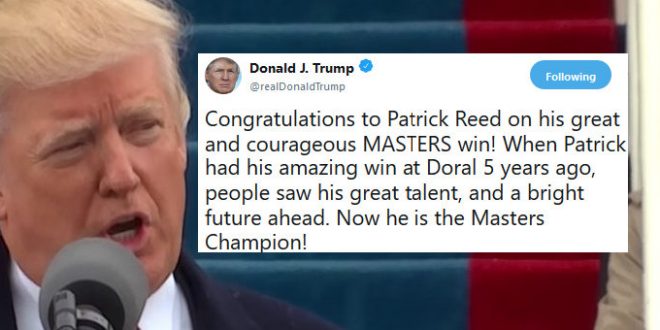 While Patrick Reed was adjusting to his new green jacket after his Masters win, President Trump tweeted his good wishes. Trump pointed out many had seen Reed shine five years ago when he won at a course he owns – Trump National Doral in Miami. But it was actually four years ago – in March 2014 – that Reed won the WGC-Cadillac Championship.

And of course, there’s this:

The Republican National Committee will hold its spring meeting at Trump National Doral Miami, a hotel and golf resort in South Florida, from May 2-5, according to RNC documents obtained by the Washington Examiner. The schedule of the May meeting of the RNC’s 168 GOP members — three from each state and territory — shows plans for a seminar examining the 2020 convention process, including the renominating of Trump as the party’s choice.

Congratulations to Patrick Reed on his great and courageous MASTERS win! When Patrick had his amazing win at Doral 5 years ago, people saw his great talent, and a bright future ahead. Now he is the Masters Champion!