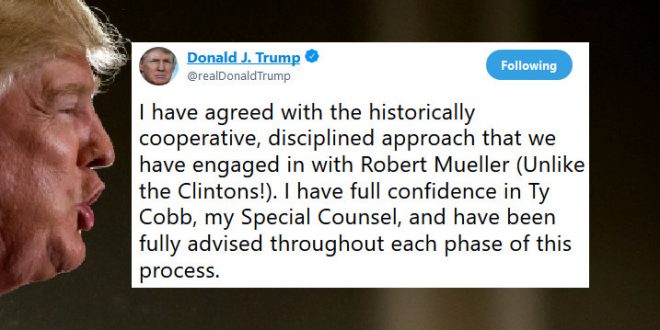 He just had to get in a dig at the Clintons.

President Trump on Thursday defended the White House team heading up his defense in the ongoing Russia investigation. Trump declared he has confidence in the White House lawyer handling the Russia probe, who has come under fire from outside allies who want him to take a more combative approach to dealing with special counsel Robert Mueller.

The president’s comments come after ousted White House chief strategist Stephen Bannon went public with his plan to counter the Mueller investigation, which includes firing Cobb “immediately,” according to The Washington Post. Bannon claimed Trump was not “fully briefed by his lawyers on the implications” of cooperating with Mueller.

I have agreed with the historically cooperative, disciplined approach that we have engaged in with Robert Mueller (Unlike the Clintons!). I have full confidence in Ty Cobb, my Special Counsel, and have been fully advised throughout each phase of this process.