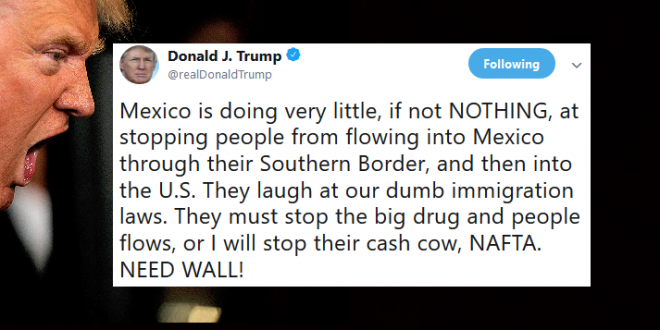 Trump: Mexico Is Laughing At Our Immigration Laws

President Donald Trump again called for an end to the filibuster and said there will be no deal with Democrats on the Deferred Action for Childhood Arrivals, also known as DACA.

Senate Majority Leader Mitch McConnell, R-Kentucky, has emphatically stated he is against changing senate rules to initiate a nuclear option for the legislative filibuster.

Border Patrol Agents are not allowed to properly do their job at the Border because of ridiculous liberal (Democrat) laws like Catch & Release. Getting more dangerous. “Caravans” coming. Republicans must go to Nuclear Option to pass tough laws NOW. NO MORE DACA DEAL!

Mexico is doing very little, if not NOTHING, at stopping people from flowing into Mexico through their Southern Border, and then into the U.S. They laugh at our dumb immigration laws. They must stop the big drug and people flows, or I will stop their cash cow, NAFTA. NEED WALL!

These big flows of people are all trying to take advantage of DACA. They want in on the act!

Previous Christie: Trump’s Big Mouth Might Land Him In Jail
Next David Shulkin: No, I Did Not Resign [VIDEO]