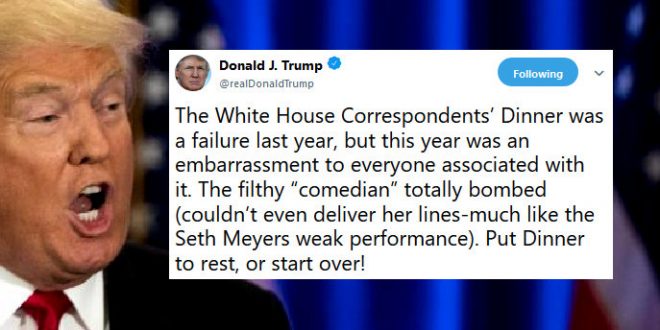 The 24-hour whirlwind of criticism or praise for Michelle Wolf’s controversial roast at the White House Correspondents’ Association dinner ended late Sunday with President Trump calling the comedian “filthy” and the association’s president expressing regret that Wolf’s monologue did not live up to the “spirit” of the dinner’s mission, which is “not to divide people.”

They were reacting to Wolf’s 19-minute routine Saturday night which included what some perceived as vulgar comments about the appearance of women in the administration, particularly White House press secretary Sarah Huckabee Sanders. Wolf said Sanders “burns facts, and then she uses the ash to create a perfect smokey eye.” She also compared Sanders to the Aunt Lydia character in “The Handmaid’s Tale” — a character who indoctrinates the handmaids with sinister beliefs.

The White House Correspondents’ Dinner was a failure last year, but this year was an embarrassment to everyone associated with it. The filthy “comedian” totally bombed (couldn’t even deliver her lines-much like the Seth Meyers weak performance). Put Dinner to rest, or start over!

Filthy? She was just quoting you! https://t.co/XAU9jrpjwf

I asked @maggieNYT to quote the line where Michelle intensely criticized SHS’s appearance. She unfollowed me.

She has an extremely important job. Making vague statements that she herself cannot back up with facts/quotes isn’t helping.