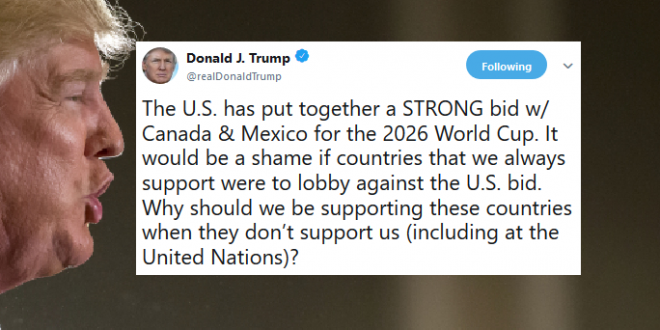 President Donald Trump waded into the campaign aimed at bringing the 2026 FIFA World Cup to the United States on Thursday, tweeting out a veiled threat to withdraw political support from nations who vote against the bid.

In a wildly surprising development, Trump, who previously has shown little appetite for soccer, appeared to throw his full backing behind the three-pronged bid that would see the U.S., Mexico and Canada potentially act as co-hosts of soccer’s biggest tournament.

The business mogul turned politician did not specify which countries he was referring to, but the only other contender in the race to be host is Morocco. Due to the political nature of FIFA, soccer’s world governing body, and the tactical nature of voting in such matters, it is widely expected that Morocco will have the support of virtually the entire African continent.

The U.S. has put together a STRONG bid w/ Canada & Mexico for the 2026 World Cup. It would be a shame if countries that we always support were to lobby against the U.S. bid. Why should we be supporting these countries when they don’t support us (including at the United Nations)?

Trump’s implied threat towards countries who back Morocco rather than US/Can/Mex 2026 WC bid seems at serious risk of breaching FIFA’s rules against political interference… https://t.co/tpcGZRGPTi

A US President tweeting a threat to withhold support for those nations that don’t back his bid for the 2026 World Cup, warning there could be a price to pay over a sport is no matter for levity, it’s disgusting & despicable & must surely be an abuse of office https://t.co/2n9fWk7l6O