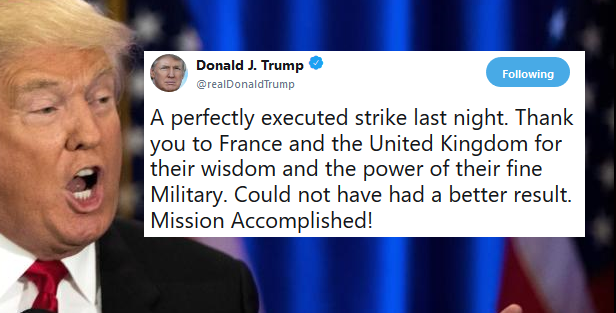 President Donald Trump tweeted Saturday saying that the U.S. led military strikes in Syria Friday night were successful. The strikes were in response to a suspected gas attack on the rebel-held city of Douma last weekend.

Syrian President Bashar al-Assad said Saturday strikes would increase Syria’s resolve to “fight and crush terrorism in every inch” of the country. Assad was seen walking into an office building Saturday morning which was the first time he was seen since the targeted strikes.

Defense Secretary Jim Mattis said the goal of the strikes was to “destroy the Syrian regime’s chemical weapons research, development and production capabilities.” He added no further strikes were planned: “Right now this is a one-time shot.”

A perfectly executed strike last night. Thank you to France and the United Kingdom for their wisdom and the power of their fine Military. Could not have had a better result. Mission Accomplished!

So proud of our great Military which will soon be, after the spending of billions of fully approved dollars, the finest that our Country has ever had. There won’t be anything, or anyone, even close!

The term “mission accomplished” was ultimately damaging for Pres. George W Bush but apparently not a concern for Pres. Trump https://t.co/CXwBIqWTE4

President Trump doesn’t seem to realize that “Mission Accomplished!” has a certain echo to it. The Middle East tends to draw things out a little longer than politicians expect. pic.twitter.com/dR9qI7kCtX