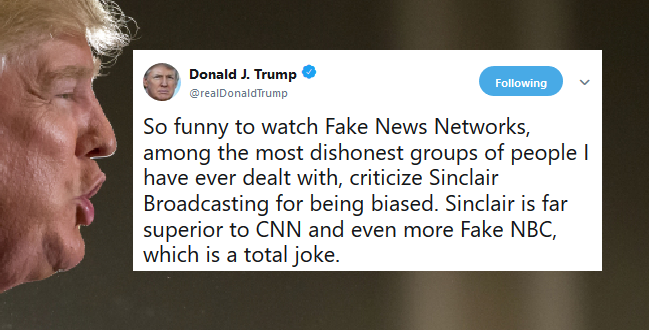 President Donald Trump on Monday praised the Sinclair Broadcast Group amid criticism that it forces its news anchors across the country to read pro-Trump propaganda on their shows. Criticism of Sinclair has come after Deadspin created a viral video compilation of Sinclair anchors reading the exact same statements attacking the mainstream press for being “extremely dangerous to our democracy” because they published stories that were critical of Trump and his administration.

So funny to watch Fake News Networks, among the most dishonest groups of people I have ever dealt with, criticize Sinclair Broadcasting for being biased. Sinclair is far superior to CNN and even more Fake NBC, which is a total joke.

How America’s largest local TV owner turned its news anchors into soldiers in Trump’s war on the media: https://t.co/iLVtKRQycL pic.twitter.com/dMdSGellH3

One of Trump’s FCC Chair’s first moves was changing a rule dating back to the 1970s that capped ownership of local media. With that, Sinclair Broadcasting reaches 72% of households. Meet America’s version of propaganda-TV. https://t.co/mne3JiSITS

2017: Trump’s FCC pushed through a rule change that allowed Sinclair to vastly expand its geographical footprint.

Sinclair Is Less A Broadcast Group Than It’s An Army Of Trump Culture Warriors https://t.co/NY4okObuDE pic.twitter.com/Jw8N5Uca6S