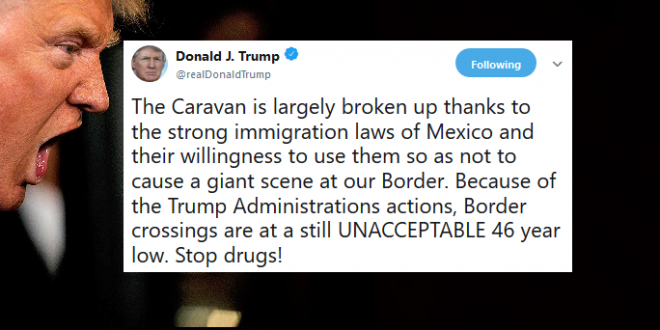 President Trump on Thursday credited Mexico’s “strong immigration laws” with disbanding a so-called “caravan” of Central American migrants before it reached the U.S., saying that a “giant scene” at the southern border was prevented. The president’s tweet comes a day after the organizers of the caravan announced that they would end their journey in Mexico City, instead of continuing north to the U.S. They said that the size of the group of more than 1,000 people had made travel too difficult, The Washington Post reported.

The story of “the caravan” followed an arc similar to many events — whether real, embellished or entirely imagined — involving refugees and migrants that have roused intense suspicion and outrage on the right. The coverage tends to play on the fears that hiding among mass groups of immigrants are many criminals, vectors of disease and agents of terror. And often the president, who announced his candidacy by blaming Mexico for sending rapists and drug dealers into the United States, acts as an accelerant to the hysteria.

The sensationalization of this story and others like it seems to serve a common purpose for Mr. Trump and other immigration hard-liners: to highlight the twin dangers of freely roving migrants — especially those from Muslim countries — and lax immigration laws that grant them easy entry into Western nations.

The narrative on the right this week, for example, mostly omitted that many people in the caravan planned to resettle in Mexico, not the United States. And it ignored how many of those who did intend to come here would probably go through the legal process of requesting asylum at a border checkpoint — something miles of new wall and battalions of additional border patrol would not have stopped.

The Caravan is largely broken up thanks to the strong immigration laws of Mexico and their willingness to use them so as not to cause a giant scene at our Border. Because of the Trump Administrations actions, Border crossings are at a still UNACCEPTABLE 46 year low. Stop drugs!

You can trace most Trump admin decision to Fox News pieces

We don’t have state-run media. We have a media-run state.

I wish Fox News would spend a morning focusing on a caravan of clowns so Trump would invade Clownsylvania or wherever those weirdos live.