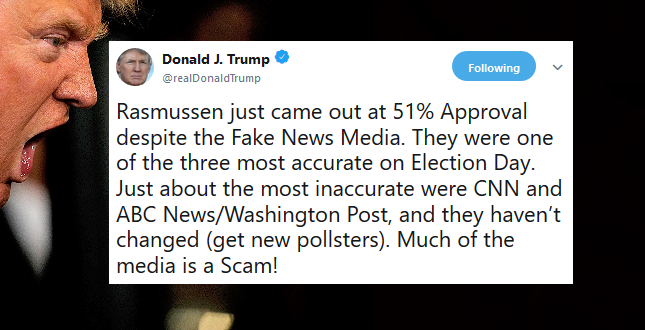 It’s true that our Daily Presidential Tracking Poll often finds Trump’s public job approval several points higher than other national pollsters do. The same thing was true during the latter years of Barack Obama’s presidency, but for some reason the big media didn’t have a problem with that.

Now it’s true that if we only surveyed the newsrooms of The New York Times, The Washington Post and CNN, Trump’s job approval ratings would be lower than low. Fortunately for our readers, however, we survey the real America outside the newsrooms and beyond the Beltway that girdles the nation’s capital. They give the president higher marks for his job performance out there.

The pollster uses an unusual pool for its polls, talking only to “likely voters” — a nebulous descriptor for a subset of the population that doesn’t try to approximate the views of all Americans. Often, likely voter pools lean more heavily Republican because, well, Republicans are often more likely to vote.

(Even in this year, when Democrats consistently say they’re more motivated to vote, the end result is that Democrats are about as likely to vote as Republicans.) Rasmussen calls only landline phones, supplementing that pool with an online survey. It’s an unorthodox methodology that has produced mixed results.

Rasmussen just came out at 51% Approval despite the Fake News Media. They were one of the three most accurate on Election Day. Just about the most inaccurate were CNN and ABC News/Washington Post, and they haven’t changed (get new pollsters). Much of the media is a Scam!

Previous Starbucks To Close All Stores For Racial-Bias Training
Next Fox News: Hannity Never Told Us About His “Informal Relationship” With Cohen But He Has Our Full Support