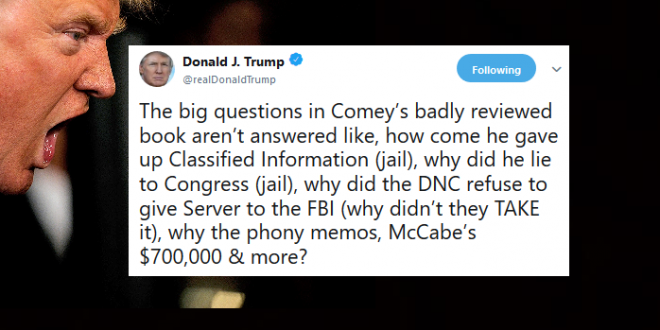 President Trump on Sunday again tore into former FBI director James Comey, accusing him of making decisions based on the fact that he assumed Hillary Clinton would win the 2016 election.

The comments come after Comey said during a recent interview his assumption that Clinton, the 2016 Democratic presidential nominee, would win the election was a factor in decisions he made regarding the investigation into Clinton’s private email server.

He said his decision to tell Congress shortly before the election that the FBI was reviewing new emails regarding the email probe was influenced by the fact he assumed Clinton would win.

Unbelievably, James Comey states that Polls, where Crooked Hillary was leading, were a factor in the handling (stupidly) of the Clinton Email probe. In other words, he was making decisions based on the fact that he thought she was going to win, and he wanted a job. Slimeball!

The big questions in Comey’s badly reviewed book aren’t answered like, how come he gave up Classified Information (jail), why did he lie to Congress (jail), why did the DNC refuse to give Server to the FBI (why didn’t they TAKE it), why the phony memos, McCabe’s $700,000 & more?

Comey throws AG Lynch “under the bus!” Why can’t we all find out what happened on the tarmac in the back of the plane with Wild Bill and Lynch? Was she promised a Supreme Court seat, or AG, in order to lay off Hillary. No golf and grandkids talk (give us all a break)!