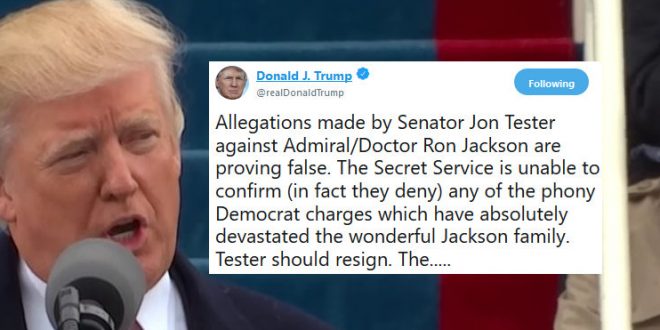 And now the revenge:

Donald Trump called for Democratic Sen. Jon Tester to resign after he alleged the president’s pick for secretary of Veterans Affairs had a dubious record of prescribing and drunk driving. In a Saturday morning tweets, the president took aim at Tester, after White House doctor Ronny Jackson withdrew his nomination for Secretary of Veterans Affairs over Tester’s shocking allegations.

Jackson withdrew his nomination Thursday after allegations by current and former colleagues raised questions about his prescribing practices and leadership ability, including accusations of drunkenness on the job. Democratic Sen. Jon Tester’s office collected the allegations, which included a claim that Jackson ‘got drunk and wrecked a government vehicle’ at a Secret Service going-away party.

Trump said Thursday that Tester will have a “big price to pay” for his part in working to sink Jackson’s nomination. But Tester is sanguine about his decision to go public with accusations about Jackson’s workplace misconduct, poor prescription practices and drinking on the job.

“If he thinks it’s my job to sweep his stuff under the table and ignore our military folks, he’s wrong. If he thinks I should not be sticking up for veterans, he’s wrong,” Tester said Thursday of the president. “I look forward to working with President Trump. I’ve worked with him many times in the past, but we disagree.”

Allegations made by Senator Jon Tester against Admiral/Doctor Ron Jackson are proving false. The Secret Service is unable to confirm (in fact they deny) any of the phony Democrat charges which have absolutely devastated the wonderful Jackson family. Tester should resign. The…..

….great people of Montana will not stand for this kind of slander when talking of a great human being. Admiral Jackson is the kind of man that those in Montana would most respect and admire, and now, for no reason whatsoever, his reputation has been shattered. Not fair, Tester!

Previous CHATTER AWAY: Overnight Open Thread
Next Ingraham: Trump Is A Shoo-In For The Nobel [VIDEO]