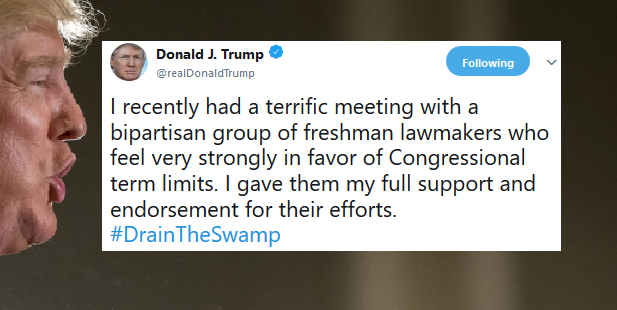 President Donald Trump voiced his support on Monday for instituting congressional term limits, renewing calls for a proposal he made a staple of his campaign pledge to “drain the swamp” in Washington.

It was not immediately clear whether the measure indeed had the backing of several freshmen lawmakers, as the president stated, with conflicting reports emerging about the substance of the meeting.

As a presidential candidate, Trump vowed to push for a constitutional amendment that would extend term limits to all members of Congress. During a rally in October 2016, Trump called for placing a six-year limit for members of the House and 12-year limit for senators.

I recently had a terrific meeting with a bipartisan group of freshman lawmakers who feel very strongly in favor of Congressional term limits. I gave them my full support and endorsement for their efforts. #DrainTheSwamp

Led this productive mtg. We must end the cycle of career politicians once & for all. We need to return to a citizen legislature & I will not stop fighting until term limits are achieved. The POTUS understands this important issue & agrees: https://t.co/hhar91wm1K https://t.co/eHHQcux1ms