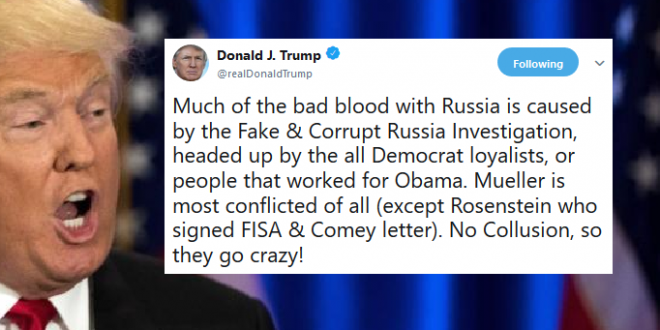 The Cohen raid continues to freak him out:

President Trump on Wednesday blamed tensions between the U.S. and Russia on special counsel Robert Mueller’s probe into Russian interference in the 2016 election.

In a tweet, Trump ripped into Mueller and Deputy Attorney General Rod Rosenstein, the official at the Department of Justice with the authority to dismiss Mueller, saying both are conflicted over the Russian investigation.

The comments come amid signals from Trump and the White House that Trump may decide to fire Rosenstein or Mueller. The president was angered on Monday by an FBI raid on his personal lawyer, Michael Cohen, which came after a referral from the special counsel. He called the raid “a disgrace” and an “attack on the country.”

Much of the bad blood with Russia is caused by the Fake & Corrupt Russia Investigation, headed up by the all Democrat loyalists, or people that worked for Obama. Mueller is most conflicted of all (except Rosenstein who signed FISA & Comey letter). No Collusion, so they go crazy!