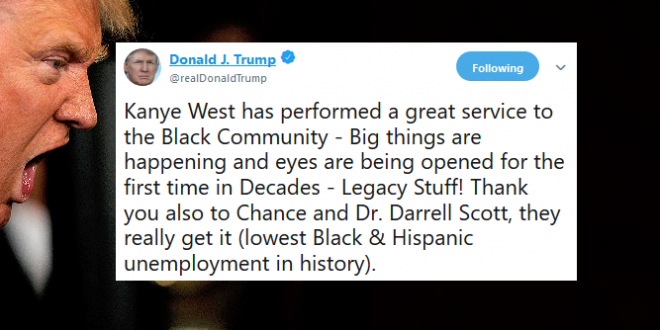 President Donald Trump continued showing Kanye West love on Friday, tweeting out some fresh praise for the rapper who has vigorously embraced him in recent days. After a period of Twitter dormancy, Kanye has emerged in the last week as a vocal defender of Donald Trump, tweeting out increasingly brash statements of support for the president and various right-wing Twitter personalities. Trump also refers to Chance the Rapper, who in a tweet defended Kanye’s decision to support the president. Chance is involved in various endeavors through his SocialWorks charity.

Kanye West has performed a great service to the Black Community – Big things are happening and eyes are being opened for the first time in Decades – Legacy Stuff! Thank you also to Chance and Dr. Darrell Scott, they really get it (lowest Black & Hispanic unemployment in history).

Black people don’t have to be democrats.

You led a lynch mob against the Central Park Five and spent five and half years lying about President Obama. We don’t need you to lecture us. And we don’t need your handpicked token black supporters to open our eyes. You, sir, are a racist. https://t.co/T16VpDF65x

Has Ms. Ingraham told Kanye to, “shut up and sing” yet, or does that only apply to anti-Trump black celebrities? 🤔

This is why Kanye’s critics were so upset. Not because he had to be a Democrat or cannot have individual views, but because they were aware how Trump and other conservatives would use those views to make sweeping statements abt black community as a wholehttps://t.co/a6R0rV09el

This Kanye moment might be entertaining if the logic that he is endorsing and that Trump espouses wasn’t the foundation for real-life damage to millions of poor & black/brown folks. Ideas matter.

The defining trait of Trump’s campaign and political profile was his embrace of white supremacy. He made it clear every time he spoke. Some serious cognitive dissonance to ignore that for the other x% you might find appealing. I guess I agree with >1% of anyone’s thoughts though

Previous ALABAMA: Lynching Memorial Opens In Montgomery
Next Russian Lawyer Who Offered Dirt On Hillary To Trump Team Admits Ties To Kremlin: I Am Their Informant