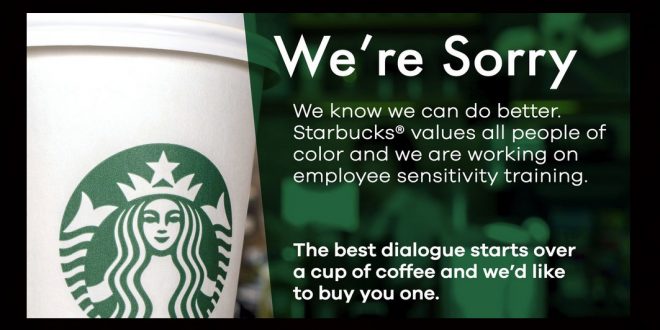 “Starbucks values all people of color and we are working on employee sensitivity training” the fake flyers read, some with the accompanying hashtag #FreeBlackCoffee. “The best dialogue starts over a cup of coffee and we’d like to buy you one.”

Baristas are then told to use the discount code 1488, which combines the white nationalist 14 words phrase along with 88, which is an abbreviation for the phrase “Heil Hitler.” The QR code on the flyers also links to a website which translates the code as the n-word.

The fake coupons are, perhaps obviously, in response to yesterday’s decision by Starbucks to close their stores next month for a one-day racial sensitivity training session.

Mark Dice, the alt-right troll seen below, last appeared on JMG in 2016 when he falsely claimed that Starbucks was trying to silence him by buying the rights to a 2015 video in which he denounces them for hating Jesus.

UPDATE: Dice deleted the below tweets minutes after I reported them to Twitter Support.

This is the perfect Culture Jam! #FreeBlackCoffee Get yours tomorrow at Starbucks 😆 pic.twitter.com/lRKe5p1PXK

Ey make sure you get up on your free coffee tomorrow #Starbucks #FreeBlackCoffee pic.twitter.com/4yUAX5Ycw4

This is so great. Someone needs to videotape themselves trying to redeem this ‘coupon’ for #FreeBlackCoffee and go full SJW when they say it’s fake 😆 https://t.co/2UAZqzetVy