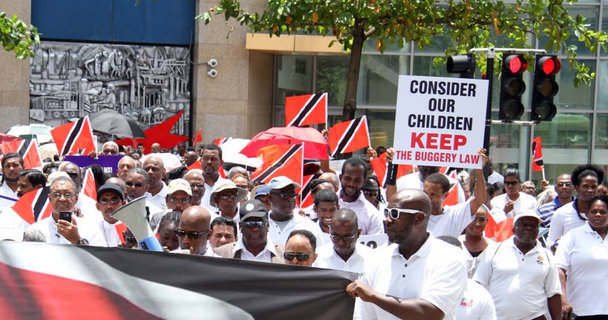 Over 500 activists, mobilised by T&T Cause – a coalition of local evangelical churches – congregated in front the Parliament building yesterday. It was the starting point of their peaceful march to protest the possibility that the High Court may rule against the constitutionality of buggery laws – all in defense of preserving family values.

The protest started at noon, where the activists, dressed in white, waving miniature national flags and armed with signs saying “Stand Up for A Cause”, “Consider the Children” and “Don’t Remove the Buggery Law” along with “Escape Hell”, “The End Is Near” and “Jesus is Coming,” thronged the sidewalk in front of the Parliament.

Their march took them along the Brian Lara Promenade, up Frederick Street, ending in Woodford Square. And at Woodford Square, they encountered a counter-protest by a small group of LGBT rights advocates, clearly distinguished in the sea of white waving their rainbow flag.

“We do not want the buggery laws to be removed.” Redemption Christian Centre pastor Dr Victor Gill of the T&T Cause non-governmental organisation (NGO) made his position clear after a peaceful walk through the streets of Port of Spain, yesterday.

Gill also said if the buggery laws were removed, God would visit his wrath upon Trinidad and Tobago and it would lead to more natural disasters and destruction. He said he was worried about the education which will be imparted to his children and grandchildren, “leading them to think homosexuality was acceptable in the eyes of God”.

A ruling in the buggery repeal case is expected from the High Court on April 12th. Trinidad and Tobago, population 1.3 million, became independent from Great Britain in 1962.