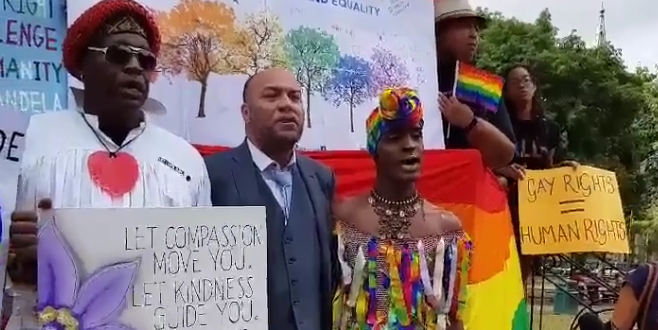 Trinidad’s High Court today ruled that the nation’s law against same-sex intimacy is unconstitutional. Justice Devindra Rampersad, who is presiding over the case, stated in his ruling: “The court declares that sections 13 and 16 of the [Sexual Offences Act] are unconstitutional, illegal, null, void, invalid and of no effect to the extent that these laws criminalise any acts constituting consensual sexual conduct between adults.” Sections 13 and 16 of that law criminalize buggery and indecency between adults. Trinidad inherited that law from its days as a British colony.

Several days ago hundreds of Christians protested against overturning the law, warning that doing so will inevitably lead to legalizing same-sex marriage. Trinidad and Tobago, population 1.3 million, gained independence from the United Kingdom in 1962.

We are celebrating with our family as LOVE wins In Trinidad! 🌈

Verbal clash between protesting groups on the steps of the Hall of Justice. Shane Superville will be going live on Newsday’s Facebook page with an update. pic.twitter.com/heaO5u8GWb

Love has won in #Trinidad congz to @trinijayjay and the entire team. Thanks to the judges. @PeterTatchell @PT_Foundation @PinkNews @gaystarnews @MailOnline @Independent @guardian @TheSun pic.twitter.com/n1ZHRegGau

Activist Jason Jones sings the national anthem before hwading to the High Court to hear the ruling on his matter challenging #buggery laws in Trinidad and Tobago pic.twitter.com/apCCLvt0pt

Previous Liberty Counsel: The Media Uses Satanic Psychological Warfare To Spread Lies About Glorious Leader [VIDEO]
Next Jimmy Carter Warns Trump On Syria: Any Nuclear Exchange Would Be Catastrophic For All Human Beings