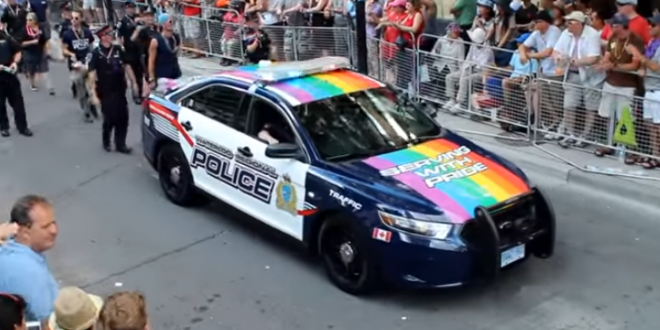 TORONTO: Cops Withdraw From Pride At Request Of Organizers Over Their Response To Anti-LGBT Crimes

Toronto police will withdraw an application they submitted for officers to march in this year’s Pride parade. The decision was made to avoid “any setback” in the relationship between the police service and Toronto’s queer communities, chief Mark Saunders wrote in a statement Tuesday. The goal is to restore confidence in police in what, he admitted, are “challenging times.”

The decision comes after a joint statement Monday evening by Pride Toronto and several community organizations, calling on police to withdraw their request to participate. “My hope is that this move will be received as a concrete example of the fact that I am listening closely to the community’s concerns and I am committed thoroughly to building a better, stronger relationship between us,” Saunders wrote.

In an interview with CBC’s Metro Morning earlier Tuesday, Pride Toronto executive director Olivia Nuamah said the investigation into alleged serial killer Bruce McArthur has widened the schism between LGBT residents and police. McArthur, 66, was arrested on Jan. 18 and later charged with six counts of first-degree murder for the deaths of six men who had ties to the Church and Wellesley neighbourhood, often called the Gay Village.

News of his arrest came little more than a month after Saunders said publicly that there was no evidence to suggest a serial killer was linked to the disappearance of LGBT residents. Several LGBTQ groups have said police did not seriously consider community fears that a serial killer was targeting men in the gay village. Speaking to reporters, Toronto Mayor John Tory said he’s hopeful discussions will continue between police and Pride, but recognizes the difficult circumstances that have led to where they are today.

The city’s annual Pride parade, one of the largest in the world, can trace its origins to raids on four gay bathhouses in 1981, known as Operation Soap, in which Toronto police arrested more than 300 people. Tensions between the LGBT community and Toronto police have continued ever since. In 2016, activists from Black Lives Matter staged a sit-in protest against harassment by police and racism in the broader LGBT community. One of their requests during in the sit-in, that police not march in the parade in uniform, was honoured the following year amid opposition at City Hall.