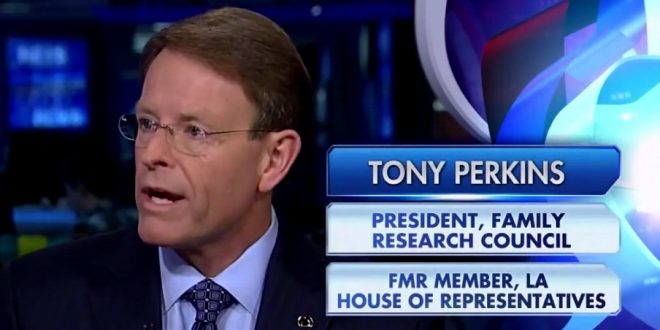 Tony Perkins: Gays Have Subpoenaed Our Secret Anti-Transgender Messages To Trump, So Send Us Money

As a trusted friend of FRC, I wanted to make you aware of this developing situation and ask for your prayers. You’ll recall that last July, President Trump kept his pledge to end the Obama era of social experimentation in our nation’s armed forces. Moving away from political correctness and putting the focus on the military’s mission of preparing to fight and win wars, he announced that the military would return to the status quo policy of not allowing individuals to serve who identify as transgender.

Despite fierce push back from LGBT activist groups, the Department of Defense released their report last month reinforcing the administration’s commitment to implementing policies that are essential to keeping our military strong and our country safe. Upset by these actions, groups like the National Center for Lesbian Rights and GLBTQ Legal Advocates & Defenders have resorted to one of their favorite avenues to impose their fringe agenda: the court system.

Last fall, these activists sued the Trump administration to put a hold on the policy change. And now they have issued subpoenas, demanding that we produce all communications on the topic between senior leaders at Family Research Council and the administration. We’ve had to hire a law firm to represent us in the case, and our lawyers have objected to this demand, asserting our First Amendment religious freedom and speech rights. The LGBT activist groups have now filed a motion seeking a court order compelling us to turn over the privileged documents.

Let me be clear, the purpose of these subpoenas is not to resolve any constitutional questions. Their intent is clear — to intimidate FRC and our supporters from standing up for our military service members. They also know that it takes significant time and resources to respond to subpoenas, scarce time and resources that we should be focusing on advancing faith, family, and freedom.

If standing up against injustice stirs your heart, we now need you to stand with FRC. Will you pray for us as we face this legal challenge? And will you prayerfully consider a generous gift to help us fight this attack as we continue to stand strong and defend your right to influence your government?