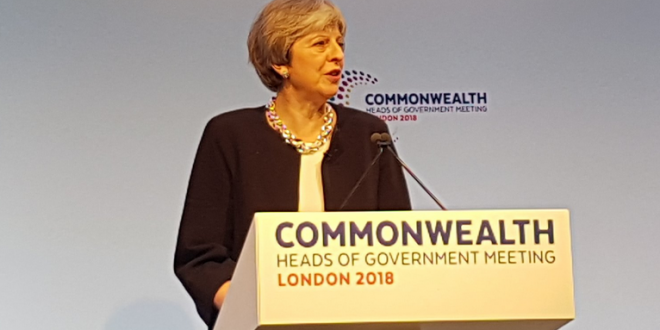 Theresa May Calls On Commonwealth To Reform Anti-Gay Laws: “I Regret Our Legacy Of Discrimination”

Prime Minister Theresa May said on Tuesday she regretted Britain’s role in anti-gay legislation across its former colonies, seeking to address criticism of the Commonwealth at its gathering in London. May is looking to reinvigorate the Commonwealth, a 53-country network of mostly former colonies, as Britain seeks new post-Brexit ways to project its influence in the world and establish a role as a leader of free trade.

Speaking on the second day of a week-long meeting in London, May addressed a wide range of humanitarian and environmental issues, including laws which outlaw same-sex activity in 37 of its 53 member nations. “I am all too aware that these laws were often put in place by my own country. They were wrong then and they are wrong now,” May said. “As the United Kingdom’s Prime Minister I deeply regret both the fact that such laws were introduced and the legacy of discrimination, violence and even death that persists today.”

This is what we wanted to see in #CHOGM2018. Strong words from UK PM Theresa May @Number10gov on regret and calling out those countries who were and still are wrong. There is still SO much to do across the Commonwealth for LGBT+ equality. #QueerCommonwealth 🌈 pic.twitter.com/5JpPEOKvL5

Previous Morning Joe On Hannity: My God, How Awkward
Next Koreas May Declare Official End To 68-Year War