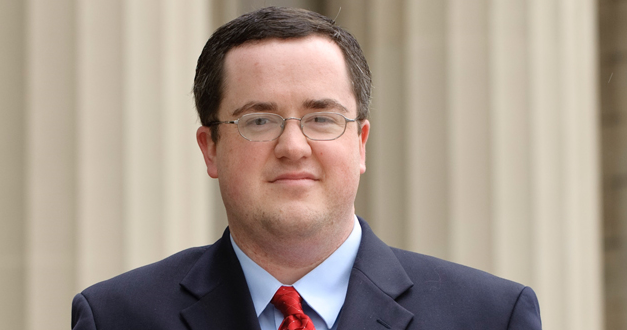 The Republican-dominated House in Tennessee voted Tuesday to punish the city of Memphis for removing Confederate monuments by taking $250,000 away from the city that would have been used for a bicentennial celebration next year.

The retaliation came in the form of passage of a last-minute amendment attached to the House appropriations bill that triggered heated debate on the House floor and stinging rebukes from lawmakers from Memphis. Rep. Antonio Parkinson began to call the amendment vile and racist before being cut off by boos from fellow lawmakers.

Last year the city of Memphis, which is majority black, was able to find a legal loophole to get rid of two Confederate statues and a bust by selling city parks to a nonprofit, which swiftly removed the monuments.

The bill was authored by state Rep. Matthew Hill [photo above], an anti-Obama birther who also once pushed a bill that would force employees to speak English at the workplace. Last year Hill co-sponsored a bill that would have made it legal to run over protesters if they are blocking the road.

RELATED: You may recall that Todd Starnes called for the arrest of the Memphis City Council after the statues were removed.

Previous Morrissey: The Loony Left Forgets Hitler Was A Leftist
Next Comey: I’m Like The Breakup Trump Can’t Get Over