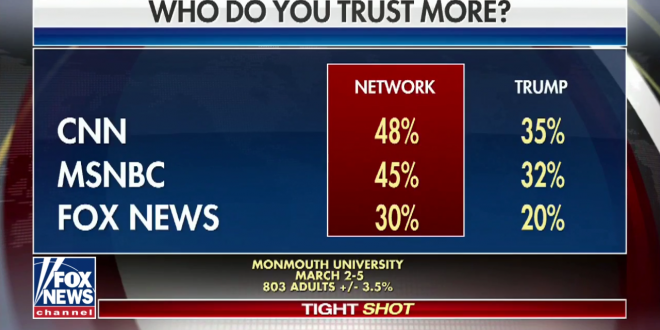 Fox News has inadvertently posted a graphic showing it trails other cable news networks in trustworthiness. During a segment on Sunday on Media Buzz, host Howard Kurtz was discussing with the Republican pollster Frank Luntz a Monmouth University poll which asked respondents if the media regularly or occasionally reports fake news. The graphic that came up on screen showed results from another question, about what cable news outlets respondents trusted more. Fox News was last at 30%, behind CNN and MSNBC, both regular targets of attacks by President Donald Trump.

When the image popped up, Kurtz blurted, “That’s the not the graphic we’re looking for. Hold off. Take that down, please.”

Fox News host Howard Kurtz tore into the Associated Press on Monday, blasting the news service for running a story that suggested he mistakenly aired an unflattering graphic about Fox News and then ordered it removed when he realized his error.

“The Associated Press should be embarrassed by a story that utterly distorts what happened yesterday on my program ‘Media Buzz.’ And its dishonest piece was made worse by the fact that the wire service didn’t bother to contact me or Fox News for comment,” Kurtz thundered in a Facebook post on Monday.

During the segment, the control room mistakenly posted the graphic early, while I was dealing with the fake news questions. So I calmly asked that it be taken down. About a minute later, I asked for the graphic to be put back on the screen and discussed the finding with my guest, pollster Frank Luntz,” he wrote.