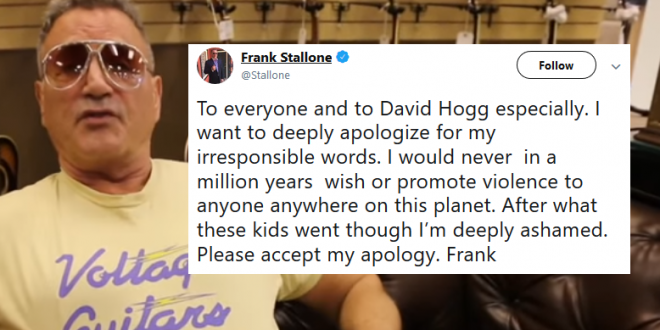 Sylvester Stallone’s younger brother Frank apologized to Parkland shooting survivor David Hogg Sunday morning for calling him a “little bitch” and a “coward” who deserves a “sucker punch.” Frank Stallone is best known for his 1980s song Far From Over which appeared in the movie Staying Alive and achieved some Billboard success. He often appeared on Saturday Night Live as the punchline to Norm Macdonald’s Weekend Update jokes.

To everyone and to David Hogg especially. I want to deeply apologize for my irresponsible words. I would never in a million years wish or promote violence to anyone anywhere on this planet. After what these kids went though I’m deeply ashamed. Please accept my apology. Frank

Here, let me translate: “In the spirit of Holy Week, I find it vexing that I got in trouble for being mean to a teenage massacre survivor, so I’m apologizing so people will stop being mean to me.” So. Much. Courage. Previous Gowdy: My Benghazi Probe Wasn’t “Hyper Focused” On Hillary, She Was Just One Of A Hundred Witnesses
Next CHATTER AWAY: Overnight Open Thread