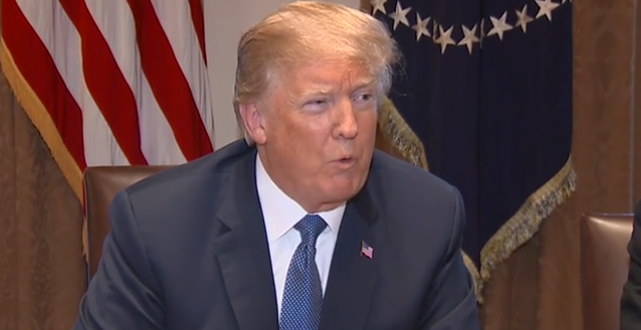 State TV Reporter: Trump Mouthed “Thank You” To Me For Asking “Why Don’t You Just Fire Robert Mueller?”

“I don’t know if you know this, Kevin, but it was me who actually asked the question to the president, ‘Why don’t you just fire Mueller?’ And the president responded to that, which was pretty remarkable in terms of what he was telling us and obviously telling the rest of the American public. He is not happy with the Mueller investigation. He tweeted this morning that it’s a ‘A TOTAL WITCH HUNT’; that’s the way he described it yesterday, that it’s disgraceful. And he seemed to be contemplating actually firing Bob Mueller.

“Yesterday was a remarkable day for me, Kevin. He answered four of my questions yesterday over the course of the full day. And when we were leaving the room, the president mouthed to me, ‘Thank you.’ I think he wanted to get that off his chest and he wanted the question that I posed to him yesterday. And so, that’s the reason why you see this answer being rerun constantly on 24-hour cable. It is news that the president is contemplating — it sounds like — possibly removing Bob Mueller from his position as special counsel.”