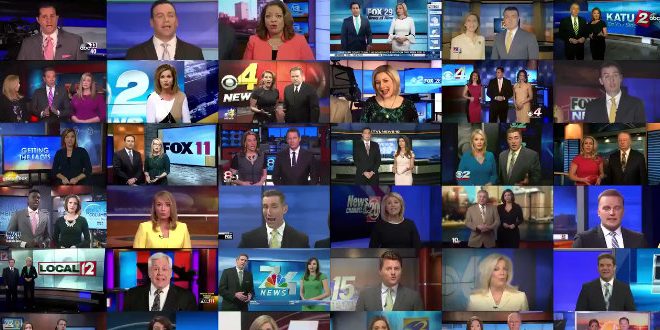 Earlier this month, CNN’s Brian Stelter broke the news that Sinclair Broadcast Group, owner or operator of nearly 200 television stations in the U.S., would be forcing its news anchors to record a promo about “the troubling trend of irresponsible, one sided news stories plaguing our country.”

The net result of the company’s current mandate is dozens upon dozens of local news anchors looking like hostages in proof-of-life videos, trying their hardest to spit out words attacking the industry they’d chosen as a life vocation.

From the Seattle Post-Intelligencer:

The claim of balanced reporting is undermined by must-run segments like the one about the “Deep State” that ran during KOMO’s 6 p.m. newscast last week. In the March 21 segment, former Trump adviser Sebastian Gorka parroted a Trump talking point regarding the existence of a “Deep State” attempting to undermine the U.S. government.

That segment was produced by Sinclair’s Kristine Frazao, who before coming to Sinclair was a reporter and anchor for the Russian-government funded news network RT, described as “the Kremlin’s propaganda outlet” by the Columbia Journalism Review.

How America’s largest local TV owner turned its news anchors into soldiers in Trump’s war on the media: https://t.co/iLVtKRQycL pic.twitter.com/dMdSGellH3

What Sinclair did here was horrid, but every local anchor who went along with this stunt should be deeply ashamed of themselves. https://t.co/b1uR4Deyaz

Among the dark ironies of the script these anchors have to read is how they each have to mention their hometown markets as if it’s tailor-made for their audiences when in reality it’s broad-based propaganda to be spread across the nation without local regard https://t.co/mMRgt4KODZ

Find out if any of your local stations are owned @WeAreSinclair (Sinclair Broadcast Group). If so, make sure to boycott watching them so advertisers drop. This is what corporate authoritarian propaganda looks like. #BoycottSinclair https://t.co/tZDQWBkm5v