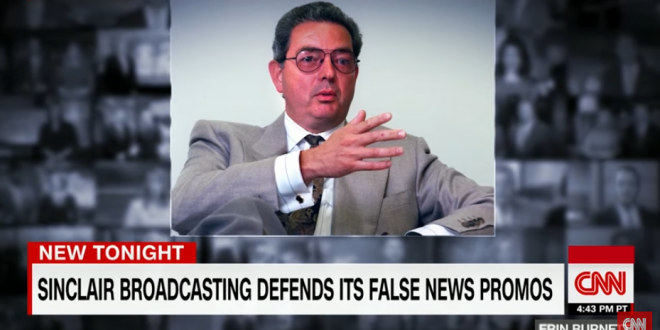 David Smith, the executive chairman of Sinclair Broadcast Group, said he dislikes and fundamentally distrusts the print media, which he believes “serves no real purpose.” In emails to New York, Smith said that print — as in newspapers and magazines — is a reality-distorting tool of leftists. Print media, he said, has “no credibility” and no relevance.

“I must tell that in all the 45 plus years I have been in the media business I have never seen a single article about us that is reflective of reality especially in today’s world with the shameful political environment and generally complete lack of integrity. Facts and truth have been lost for a long time and likely to never return,” Smith said.

“The print media is so left wing as to be meaningless dribble which accounts for why the industry is and will fade away. Just no credibility.”

According to a 1996 article in The Baltimore Sun, [Sinclair CEO] David Deniston Smith was arrested in an undercover sting aimed at a downtown corner highly frequented by street prostitutes. Smith and his alleged purchased mistress were both charged with committing an unnatural and perverted sex act–allegedly oral sex.

After spending the night in jail, Smith was released on his own recognizance. Smith eventually took a plea deal and was convicted of a misdemeanor sex offense.

According to a 2004 expose on Sinclair Broadcast Group published by Salon, part of Smith’s plea deal included a promise that Smith would own up to his behavior on air. Smith ultimately had the confession written up–and then he ordered an anchor to read it on air.