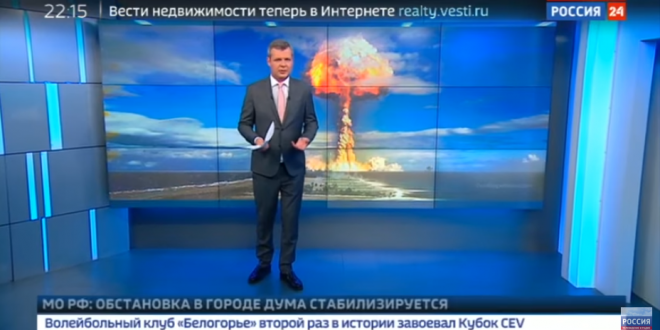 Russian state TV told citizens Tuesday to stockpile food and water as the threat of nuclear war with the U.S. intensified over Syria. Standing in front of a mushroom cloud, a presenter on state-run broadcaster Vesti 24 warned viewers to stock up on “fewer sweets and more water.”

The presenter listed off a number of food items that citizens should buy ahead of a possible war with Trump, including rice, oatmeal and sugar “for those who succumb to panic and decide to spend all their savings.” The newscaster said 30 liters of water are needed for drinking, food preparation and personal hygiene.

The program also recommended that people stock up on gas masks and read guides on how to survive war. The instructions are for “people who succumb to panic and decide to spend all their savings,” the anchor said.

The program aired just one day after sources told Newsweek that “there is a major war scare” in Moscow as President Donald Trump prepares to strike Syria in retaliation for the use of chemical weapons against civilians over the weekend.

Most outlets are characterizing the piece as meant to mock Americans rather than legitimately prepare Russians for nuclear war.