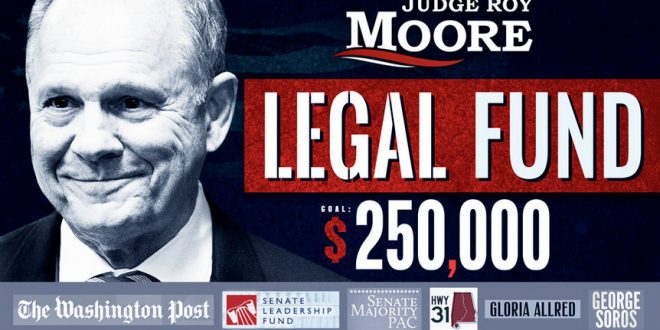 Roy Moore: Washington Post’s Forces Of Evil Just Won A Pulitzer Prize For Lying About Me, So Send Money Now

The latest fundraising efforts by Roy Moore references the Washington Post’s Pulitzer – a prize it won for stories detailing allegations the former Republican Senate candidate had sexual contact with teenage girls in the 1970s. An email from the Roy Moore Legal fund is topped with the headline “Washington Post’s 2018 Pulitzer Prizes for Roy Moore investigation, Russia reporting.”

“They spread slanderous lies and made numerous false accusations. They attacked my character. They dragged my reputation through the mud. They even attacked my wife and family. But instead of being held accountable in a court of law, the Washington Post just won the 2018 Pulitzer Prize for their lies and slander against me and my family. Meanwhile, I’m being sued for standing up and defending myself and my family from ruthless lies and attacks. And it’s exactly why you and I must stand strong in our legal fight against the forces of evil.”