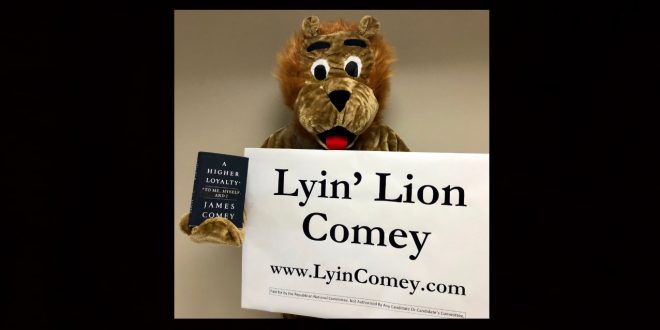 The Republican National Committee is sending out a furry costumed lion to stalk James Comey on his book tour. The furry stalker is just the GOP’s latest attempt to discredit the Trump-fired FBI director, who has been making regular rounds on the network news to promote his new book, including a much-touted appearance on ABC News.

In addition to the lion stunt, the RNC has recently launched a website that claims to set the record straight about Comey who, according to the webpage “wants to portray himself as a non-partisan, by-the-book Boy Scout rather than a politically motivated Washington insider.”

Shadowing Comey: @CNN has learned the Republican campaign to discredit the former FBI director is now turning to lions, including this fury costumed creature who will be tailing Comey on his upcoming book tour. This gives new meaning to the role of tracker…. pic.twitter.com/Jgks4gtOUD