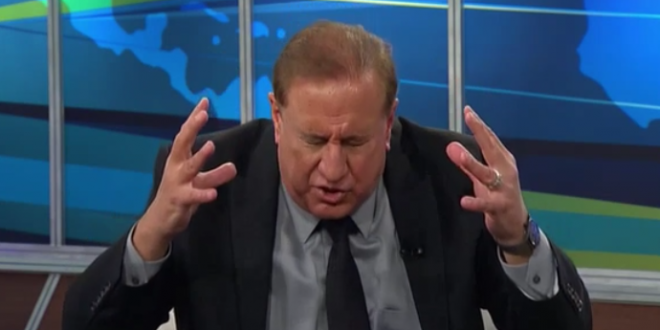 Right Wing Pastor: I Squished An Ant And Then I Raised It From The Dead And Then It Looked At Me [VIDEO]

You might recall this lunatic’s previously appearances on JMG, such as the time that he claimed demonic hornets were stinging Americans with “lustful homosexuality.” Today he’s back with another insect tale, this time about an ant that he squished and then miraculously resurrected with the power of White Jesus.

Right-wing pastor Frank Amedia, who served as a volunteer “Christian policy liaison” for Donald Trump’s presidential campaign before being called by God to launch his POTUS Shield effort on the night of Trump’s electoral victory, claimed that he had a miraculous experience when, through the power of God, he was able to bring an ant back to life.

Amedia, who claims to have the power to turn back tsunamis, appeared on the program “TCT Today” last Friday, where he told the tale of his latest miracle, which he claimed was even more amazing than the various times when he has made it rain, healed disease, regrew organs, or even resurrected people from the dead.

“This was a smart ant, a Jewish ant. I named him Yakov. I began to weep inside of me. And then the Lord said, ‘Son, take your finger and touch the ant.’ The power of God shot out … and the ant, it came alive and the pieces all were together and it jumped up on my finger, came up very slowly into my palm, and stopped right there as if it was looking right at me.”