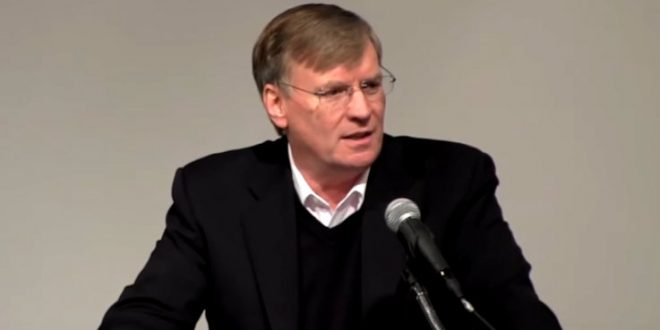 Right Wing Pastor: Christians Who Don’t Obey Bible’s Command To Own AR-15s Are Worse Than Heathens

Chuck Baldwin, a right-wing pastor and radio host who was the 2008 Presidential nominee of the Christian Reconstructionist Constitution Party, appeared on Sheila Zilinsky’s podcast over the weekend, where he declared that any Christian who does not own the equivalent of an AR-15 assault rifle “has denied the Christian faith” and is “worse than a heathen.” Citing a passage from 1 Timothy, Baldwin asserted that every adult has “a duty to provide for your family, but you cannot provide protection for your family without being equipped to do so.”

In 2010, Baldwin retired from his position as pastor of Crossroad Baptist Church and announced his intention to move to Montana, because he believed God had told him that the mountain states were the “tip of the spear in the freedom fight.” In March 2011, he wrote an article in support of the American Redoubt strategic relocation movement originated by novelist and blogger James Wesley Rawles.

This plan designates five western states (Idaho, Montana, Wyoming, eastern Oregon, and eastern Washington) as a safe haven for conservative Christians and Jews. Baldwin believes that “the South was right in the War Between the States”, and that the leaders of the Confederacy were not racists. He uses the term “War for Southern Independence.” Baldwin had already begun promoting militia movements on his radio show as early as 1995.

In addition to his 2008 run for president, Baldwin briefly ran for Montana lieutenant governor in 2011, withdrawing before the primary.