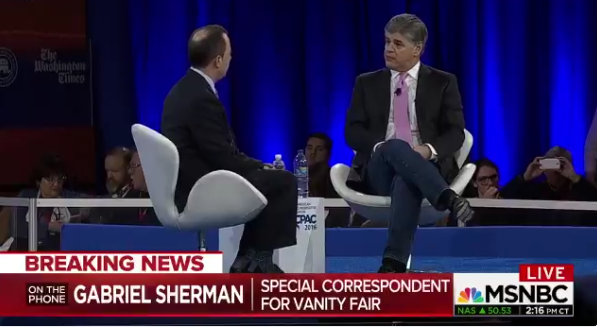 Cohen’s lawyers had acknowledged that Cohen had three legal clients since 2017 in a filing in federal court related to legal issues surrounding documents the FBI obtained by raiding his office, home, and hotel room last week. Two clients — Trump and GOP fundraiser Elliott Broidy — were publicly known. Attorneys for Cohen had argued that the identity of the third should remain secret. But Judge Kimba Wood rejected that argument, forcing Cohen’s lawyer to reveal his work for Hannity.

Vanity Fair’s Gabriel Sherman reported on MSNBC soon after that Hannity hired Cohen “to help defend him against left-wing groups that were calling for boycotts,” an apparent reference to Media Matters’ well-publicized campaign to get advertisers to stop supporting Hannity’s program. Sherman added that Hannity may have hired “other lawyers and/or private investigators” as part of the effort.

I guess I should double-check with my employers but I’m pretty sure I’m not supposed to accept valuable services for free from people I cover. https://t.co/nl9F6cEWDK

@gabrielsherman just fyi. In late May last year, Hannity repeatedly said on his show that he was doing an investigation into me/Media Matters. I can round up the clips for you