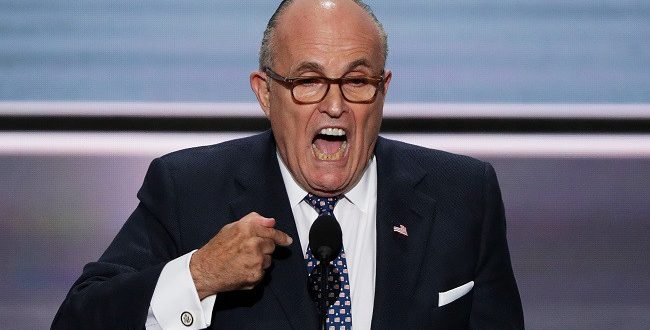 CLEVELAND, OH - JULY 18: Former New York City Mayor Rudy Giuliani delivers a speech on the first day of the Republican National Convention on July 18, 2016 at the Quicken Loans Arena in Cleveland, Ohio. An estimated 50,000 people are expected in Cleveland, including hundreds of protesters and members of the media. The four-day Republican National Convention kicks off on July 18. (Photo by Alex Wong/Getty Images)

Former New York City Mayor Rudy Giuliani has been in talks to join the President Donald Trump’s personal legal team, according to a person familiar with the matter. No decision is currently final.

A slew of foreign policy matters which Trump has had to deal with has slowed the process of expanding the president’s legal team, according the person familiar with the matter. Trump’s time has been absorbed by North Korea and Syria, which has limited his availability to speak with potential new members of his legal team.

Giuliani did not immediately return a request for comment. But he is a close ally of the president, having campaigned closely with him during the 2016 election. Giuliani gave an impassioned speech in favor of Trump at the Republican National Convention in Cleveland.

“I’m doing it because I hope we can negotiate an end to this for the good of the country and because I have high regard for the president and for Bob Mueller,” Giuliani said in an interview. Giuliani said he formalized his decision in recent days, including over dinner last week at Trump’s Mar-a-Lago resort in Florida.

Giuliani and Trump spoke on Thursday about legal strategy moving forward, along with Sekulow, who Giuliani described as a “good friend.” He added that he and Cobb spoke on Wednesday.