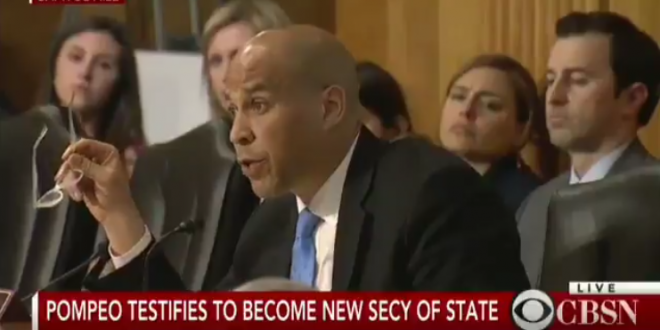 Sen. Cory Booker just grilled former CIA director and Secretary of State nominee Mike Pompeo on his anti-LGBT history, demanding to know of Pompeo still believes “gay sex is a perversion.” Pompeo sputtered and flailed, saying only that he has treated gay people with respect. Booker also demanded to know if Pompeo continues to oppose same-sex marriage. Pompeo grimaced and said that he does, but that he had treated married gay staffers at the CIA with respect.

Sen. Cory Booker asking Mike Pompeo if he believes that being gay is a perversion during the Secretary of State nomination hearing. pic.twitter.com/sYAoqanZ19

Cory Booker is the hero of this Pompeo confirmation hearing

Sen Booker: “You do not believe it’s appropriate for two gay people to marry?”
Pompeo: “Senator, I continue to hold that view” #tictocnews pic.twitter.com/HbWO5ooWLN

Sen. Cory Booker: Do you believe that gay sex is a perversion, yes or no?

Mike Pompeo: “My respect for every individual, regardless of the sexual orientation, the respect is the same.” https://t.co/LefW8v6ng3 pic.twitter.com/WEmX1W45Bd

Previous Jimmy Carter Warns Trump On Syria: Any Nuclear Exchange Would Be Catastrophic For All Human Beings
Next Trump Praises Himself On Handling Mueller Probe