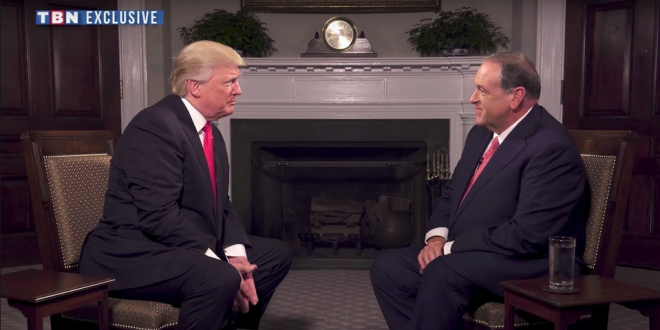 In the past two years, largely out of view of the coastal media and the Washington establishment, a transformation has taken place. As Christian networks have become more comfortable with politics, the Trump administration has turned them into a new pipeline for its message. Trump has forged a particularly tight marriage of convenience with Pat Robertson’s Christian Broadcasting Network, which since early in the 2016 campaign has offered consistent friendly coverage and been granted remarkable access in return.

Christian broadcasters offer an unmediated channel to the living rooms of a remarkably wide swath of American believers, an audience more politically and racially diverse than you might expect. TBN alone has more local stations to its name than Fox or the three major networks. They offer Trump officials a softball treatment available in few other venues.

Huckabee’s own daughter, after all, is the president’s press secretary—a relationship that would disqualify him as an interviewer on most networks. One of Huckabee’s questions to the president was about the first lady, and whether it bothered the president that his wife “has fantastic approval ratings, soaring above anybody else in the entire city of Washington.”

I encourage you to read the full piece.

@politico comes to visit me in Nashville to discuss @tbn show and faith community and politics. I think it’s pretty fair piece. Read and share YOUR thoughts (unless they are nasty, vile, vulgar, hateful, and lewd). Of course you’ll share those anyway! https://t.co/umHxHKWGRk

How Trump created the The Church of the Donald w/ the help of credulous Evangelicals in the media: https://t.co/snjINBLEHN via @politicomag

“Trump seemed to sense early on that the Christian television audience would be receptive to his campaign theme of a kind of resentful nostalgia for an imagined idyllic past.” https://t.co/z32uZKAp6Q

Previous Kellyanne Conway To CNN: You Only Ask About My Husband’s Anti-Trump Tweets Because I’m A Woman
Next UTAH: Mitt Romney Forced Into Senate Primary After Failing To Win Over State GOP Convention Delegates