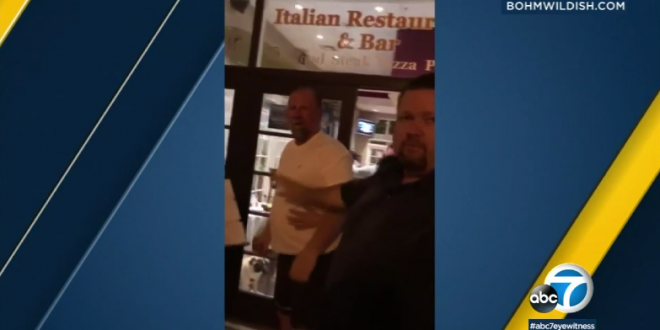 Three men who were tossed out of a Newport Beach restaurant claim they were victims of gay bashing. Cellphone video shows the end of the April 13 encounter when a man is seen physically grabbing and wrestling one of the alleged victims out the door of the bar and throwing him to the ground.

“You’ve been warned,” he growls in the video, as the alleged victim lies on the ground in apparent pain. Newport Beach police say two people were battered in the incident and they are looking for the suspect seen on video. They asked for the public’s assistance.

In their lawsuit filed in Orange County Superior Court this week, Angel Bonilla, Colton Moyer and Clement Serafin say they were visiting Balboa Island on April 13 when they decided to stop by Siena Restaurant inside the Balboa Inn for dinner. The trio was immediately met with hostility from a woman working behind the bar, who “demanded that (the men) show their respective identification cards because she wanted to create a ruse for refusing to serve them when her real motive was to not serve gay men,” according to the suit.

After viewing Serafin’s identification card, the bartender proclaimed that it was fake and then handed it to a person sitting at the bar, apparently a patron, who examined it and “commented loudly that it was ‘definitely a fake,’” the lawsuit says. When the men asked to speak with the manager, the bartender shouted for them to “get out” and called the men a gay expletive, according to the lawsuit.

In a statement, the restaurant claims to have hosted same-sex weddings and that it does not “condone discrimination against anyone.”