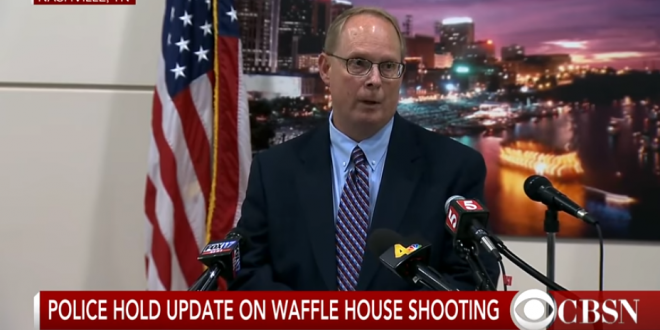 Police continued their intensive search Monday for the 29-year-old suspected of opening fire at a Tennessee Waffle House and killing four people one day earlier. The Metro Nashville Police Department said early Monday that “there have been no credible sightings” of the suspected gunman, Travis Reinking, after an overnight search by local, state and federal law enforcement officers. Reinking, police said, was last seen Sunday morning behind his apartment complex.

Months before Reinking became the target of a manhunt, authorities arrested him for trying to breach a barrier near the White House and later seized his guns. Among the four weapons they took from Reinking was the AR-15 semi­automatic rifle that police say he used in the Waffle House on Sunday. One of the other weapons — a pistol — is missing from Reinking’s apartment, police said.

The guns, however, were later returned to Reinking’s father, who has acknowledged he gave them back to his son, officials said. Under Illinois law, certain confiscated guns can be released to a family member, but Reinking could not lawfully possess the weapons in that state. It’s unclear whether possessing the weapons was illegal in Tennessee.

After the shooting Reinking shed his jacket and was nude when he went to a nearby apartment complex, where police believe he lives. A witness told police that they saw him leaving wearing only black pants, and he is believed to be shirtless and barefoot.

There is still no clear motive, but police said Reinking may have “mental issues.” Police reports from Morton describe a disturbed Reinking with paranoid delusions, and someone who liked firearms. In May of 2016, deputies from Tazewell County, Illinois, were called to a CVS parking lot. Reinking told officers that singer Taylor Swift was stalking him and hacking his phone.

Officials with the Nashville public school system say schools will go into “lock-out” mode if Reinking isn’t found in time for class Monday. During the lock-out, students will be free to move about the building but no guests or visitors will be allowed to enter the building.

MNPD officers, to include SWAT, have continued the search for Travis Reinking in the Antioch area overnight. There have been no credible sightings. The search will continue. All schools in the area have been cleared by officers. He was last seen Sun morn behind his apt complex. pic.twitter.com/ChY1ihCdKG