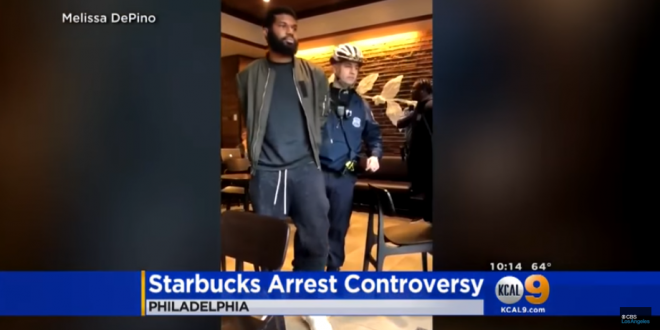 The chief executive of Starbucks apologized Saturday to two black men arrested at a Philadelphia store in an incident that has led to accusations of racial profiling by the company and police. In a statement to Starbucks customers and employees Saturday, CEO Kevin Johnson acknowledged “a disheartening situation in one of our Philadelphia-area stores this past Thursday, that led to a reprehensible outcome.”

Cellphone videos captured the tense moment Thursday afternoon when at least six Philadelphia Police Department officers stood over two seated black men, asking them to leave. A man named Andrew Yaffe arrives to tell police that the two men were waiting for him. The officer says that they were not complying and were being arrested for trespassing.

“Why would they be asked to leave?” Yaffe says. “Does anybody else think this is ridiculous?” he asks people nearby. “It’s absolute discrimination,” Yaffe adds. The two unidentified men are taken out in handcuffs soon after. They were released early Friday with no charges filed.

In a video statement streamed on Facebook Live from the Philadelphia Police Department’s page, Commissioner Richard Ross confirmed that on Thursday afternoon at 4:40 p.m., Philadelphia police received a 911 call from the Starbucks at 18th and Spruce Streets alleging disturbance and trespassing.

When police arrived, two Starbucks employees told them two men had asked to use the restroom but were told they couldn’t because they hadn’t purchased anything. The men allegedly refused to leave after being asked by Starbucks employees. Ross also said the two men refused to leave after being asked three times by police officers.

So, Ross says, officers arrested the men. The attorney for the two men, Lauren Wimmer, told the Philadelphia Inquirer she received word that the two were being released from custody at 12:30 a.m. Friday, nearly eight hours after the initial 911 call. Ross confirmed that the officers released the men from custody after they discovered Starbucks was not planning to prosecute them. In his statement, Ross said he believed the officers “did absolutely nothing wrong.”

“I am heartbroken to see Philadelphia in the headlines for an incident that — at least based on what we know at this point — appears to exemplify what racial discrimination looks like in 2018. For many, Starbucks is not just a place to buy a cup of coffee, but a place to meet up with friends or family members, or to get some work done. Like all retail establishments in our city, Starbucks should be a place where everyone is treated the same, no matter the color of their skin.

“Starbucks has issued an apology, but that is not enough. I have asked the Philadelphia Commission on Human Relations to examine the firm’s policies and procedures, including the extent of, or need for, implicit bias training for its employees. We are reaching out to Starbucks to begin a discussion about this.

“Commissioner Ross and his team have promised a review of their policies moving forward with regards to response to complaints like this. I believe a thorough review is fully warranted given the unfortunate outcome of this event, particularly at a time when our criminal justice reform efforts are focused on avoiding needless incarcerations.”

From the CEO of Starbucks:

First, to once again express our deepest apologies to the two men who were arrested with a goal of doing whatever we can to make things right. Second, to let you know of our plans to investigate the pertinent facts and make any necessary changes to our practices that would help prevent such an occurrence from ever happening again. And third, to reassure you that Starbucks stands firmly against discrimination or racial profiling.

In the coming days, I will be joining our regional vice president, Camille Hymes—who is on the ground in Philadelphia—to speak with partners, customers and community leaders as well as law enforcement. Most importantly, I hope to meet personally with the two men who were arrested to offer a face-to-face apology.

We have immediately begun a thorough investigation of our practices. In addition to our own review, we will work with outside experts and community leaders to understand and adopt best practices. The video shot by customers is very hard to watch and the actions in it are not representative of our Starbucks Mission and Values.

Creating an environment that is both safe and welcoming for everyone is paramount for every store. Regretfully, our practices and training led to a bad outcome—the basis for the call to the Philadelphia police department was wrong. Our store manager never intended for these men to be arrested and this should never have escalated as it did.

@Starbucks The police were called because these men hadn’t ordered anything. They were waiting for a friend to show up, who did as they were taken out in handcuffs for doing nothing. All the other white ppl are wondering why it’s never happened to us when we do the same thing. pic.twitter.com/0U4Pzs55Ci