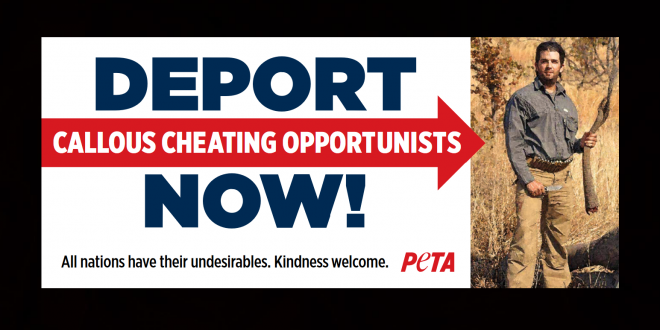 Via press release from PETA:

As President Trump deploys National Guard troops to the U.S.-Mexico border to help keep asylum-seekers out, PETA is warning people about the presence of “undesirables” much closer to home and pointing the finger at trophy hunter Donald Trump Jr.

The group plans to run billboards in the border towns of El Paso and Laredo, Texas, showing a grinning Trump Jr. posing with a knife and the hacked-off tail of the elephant he shot in someone else’s country. Next to the picture are the words “Deport Callous, Cheating Opportunists Now! All Nations Have Their Undesirables. Kindness Welcome.”

“While people are fleeing to the U.S. to escape violence, over-privileged, callous, cheating louts like Donald Trump Jr. are flying to other countries to gun down living, feeling beings just for fun,” says PETA President Ingrid Newkirk. “PETA’s border ad is a reminder that kindness is a virtue and that Central America doesn’t hold all the cards when it comes to ‘bad hombres.’”

Hunters kill millions of animals every year and have contributed to the extinction of species all over the world, including the Tasmanian tiger and the great auk. Unlike natural predators, who kill primarily sick and weak individuals, trophy hunters specifically seek out large, healthy animals who are needed to keep populations strong.

Numerous animals are injured but not killed by hunters, escaping only to die slowly and painfully from blood loss and starvation. Cecil the lion, for example, was shot with a steel arrow and left to suffer for 40 hours before he was finally killed by an American dentist. Trump Jr. has a history of self-aggrandizement at the expense of wildlife in the U.S. and abroad.

Previous Catholic League Silent On Dozens Of Pedophile Priests, Rushes Out Condemnation Of “Lethal” Gay Sodomy
Next Romney: Forget Those Shitty Things I Said About Trump