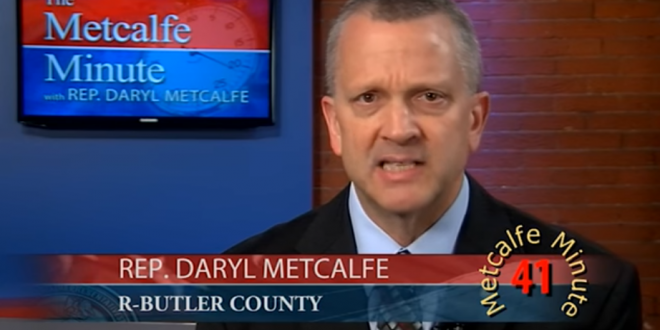 A Republican state lawmaker in Pennsylvania is calling a colleague a “lying homosexual” in a Facebook post attacking liberal legislators. Rep. Daryl Metcalfe also is defending his comments, which he made Friday.

He tells The Associated Press that he mentioned the sexual orientation of Democratic Rep. Brian Sims of Philadelphia because Sims has spoken openly about being gay, and because he believes it is “immoral behavior.”

Sims is calling Metcalfe “Rep. Snowflake McRacist” on Twitter and says Metcalfe “claims victimhood” when he’s called out in public. Metcalfe also recently accosted another state lawmaker for repeatedly touching his arm, and suggested the man might be gay.

While he was at it, Metcalfe decided to bring the smackdown against other Democratic members of his panel: “There is a pattern to the attacks that have been made against me by liberal loser Democrat legislators on my committee. Former Rep Leslie Acosta who lied about me is now convict Acosta, lying homosexual Rep Brian Sims has been under an ethics investigation, then there is constant touchy-feely Rep Matt Bradford who has touched me over 40 times in what many observers have said is an attempt to provoke me!” Dude … get over it.

Sincere’ Harris, executive director of the Pennsylvania Democratic Party released a statement about Metcalfe’s tirade: “Metcalfe’s racist and homophobic outbursts and blatant admission that he blocks legislation from advancing for the sole reason that it is sponsored by Democrats is why Pennsylvanians distrust Harrisburg. Not only is he a disgusting human being, he is incredibly unfit to run the House’s State Government Committee and Mike Turzai must revoke his chairmanship immediately.”

Another lying Philadelphia Liberal Democrat Legislator attacking me this week with the help of the media! Another Democrat playing the victim while he is actually the perpetrator! After a committee meeting last… https://t.co/WE3a93aJVb

You’re a gaslighter who threatens people and then backs down and claims victimhood when you’re called out. It’s the ultimate sign of intellectual dishonesty. Grow up and at least have the courage of your broken convictions.

My most infamously bigoted colleague, Rep. Daryl Metcalfe took to his “burn book” to attack my colleagues of color and myself call me a “lying homosexual.” I could use your help as I go up against this type of blatant homophobia and bigotry in the Capital. https://t.co/Oc7iLDN2qt pic.twitter.com/FVC4dBgbuY

PREVIOUSLY ON JMG: In August 2013, Melcalfe called for impeaching all pro-gay politicians. In June 2013, Metcalf used a chamber rule to stop openly gay state Rep. Brian Sims from speaking about the historic DOMA ruling on the state House floor, saying that Sims was in “open rebellion against God’s law.” In 2011 and in 2012 Metcalfe introduced bills to insert a ban on same-sex marriage into the state constitution. Both attempts failed.

Previous Sessions Told WH: I Might Quit If Rosenstein Is Fired
Next CHATTER AWAY: Overnight Open Thread