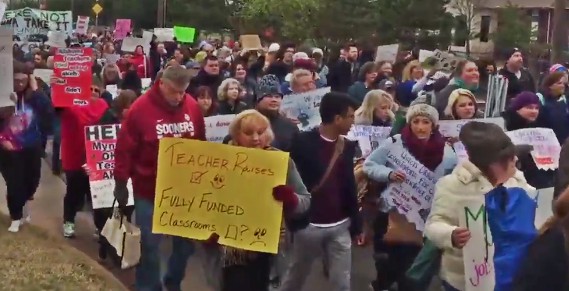 By 9:15 a.m., a continuous line of teachers, three to four people wide, was circumnavigating the Oklahoma state Capitol protesting the state’s funding level for public schools. After weeks of buildup, more than a hundred of school districts across the state were shut down as educators followed through on their promise to walkout of the classroom if their demands for higher pay for teachers and support personnel and increased common education funding weren’t met.

The thousands of teachers protesting Monday came despite the Oklahoma Legislature passing a pay raise last week, which the Oklahoma Education Association called “a down payment.” Lyndsey Slaughter, a Bixby Public Schools teacher, said she’s thankful for the pay raise, but “when you spend your own money on supplies, you don’t have much left at the end of the month.”

Sky 5: Tens of thousands of people rally in support of teacher walkout at Capitol https://t.co/NOaDuBMr4o pic.twitter.com/m9PM7LOfUc